From Sea Salt Wiki
Jump to: navigation, search
This article is a stub. You can help Sea Salt Wiki by expanding it. 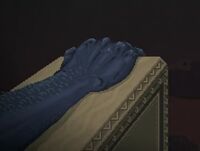 Dagon is an eldritch ocean diety and the Protagonist in Sea Salt.

Dagon, like other deities of this kind, provides benefits to his worshipers in exchange for sacrifices. His arrangement with The Archbishop follows this pattern, demanding human sacrifices and providing bounties of fish and gold in return. Should the flow of sacrifices be refused, or interrupted, Dagon may command his Apostles and Minions to punish disloyal worshipers.

Dagon's name is a direct reference to the titular character in H.P. Lovecraft's "Dagon", published in 1917.

Dagon's relationship with humans in Sea Salt is similar to that of the Great Old Ones in H.P. Lovecraft's "The Shadow over Innsmouth". Much like the plot of the game, Innsmouth worshiped the Great Old Ones in exchange for fish and gold, and was similarly attacked when the flow of human sacrifices was interrupted.